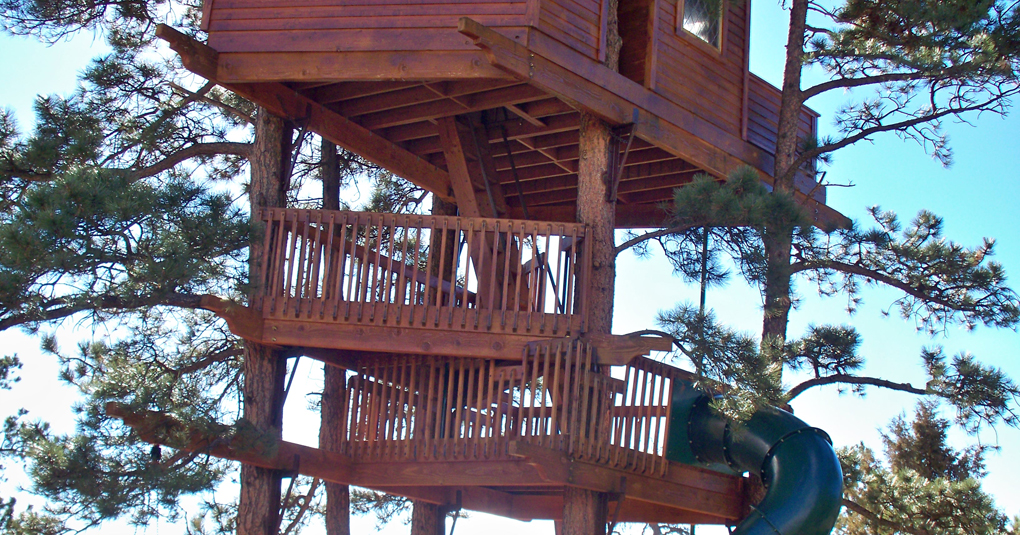 OK, lots of kids had treehouses – including this architect – but most were built of scrap lumber quickly tacked to a couple of trees in the backyard. So what kind of treehouse do you get for approximately $30,000?

Doug Sherman recruited T. W. Beck Architects to design the ultimate treehouse for his grandchildren. For their 35 acre tract off Devils Gulch Road just outside Estes Park, Colorado, Beck had already designed an addition that  transformed a 1918 cabin into a magnificent mountain retreat, while retaining not only the structural features, but the character of the cabin. T. W. Beck Architects also designed a huge barn that shares the property as well as a hot tub deck that is a vantage point for breathtaking views of the Continental Divide.

Constructed of cedar, the treehouse fits right in with the mountain style of the other structures on the property. A custom designed ladder with two rows of step like rungs at alternating intervals makes it easy to climb beyond the two lower observation decks to reach the treehouse. The treehouse is entered by pushing on a “trap door” which then opens on its own with the help of a small hydraulic mechanism.  Step inside a cozy hide-away that even has an umbrella like beam system supporting its roof. This house in a tree boasts its very own views of the Divide which can be enjoyed from a third deck that is attached to the treehouse, or from one of several diamond paned windows that open for ventilation.

Interestingly, planning department issues entered into the process of building this recreational structure. It seems that the Sherman’s 35 acres tract was once three parcels. Although Larimer County did not require a building permit the Town of Estes Park noted that the site chosen for the treehouse was near the internal property line of two parcels and therefore did not ‘officially’ meet set-back requirements. Eventually a set-back variance was obtained so the plan could proceed.

Although this is a treehouse, it is not actually attached to any of the five trees that surround it. Instead, several large, heavy-duty brackets are fastened to the trees. Wooden ‘beam’ supports which act as a levitated foundation for the treehouse rest in those brackets, allowing the treehouse to ‘float’ – which prevents damage when the wind flexes the surrounding trees in different directions.

Should anyone ever decide to leave this magnificent treehouse there are a variety of ways to depart. The ladder can be descended, of course. Or, slide down the fire pole to a lower deck then take the tube slide to ground level. Or simply grab the second fire pole from the middle deck and race your friend who’s taken the slide to the bottom – where there is what else? A sand box and tire swing, of course!  When Thomas Beck’s mother, Lorna T. Beck, heard about the project she said, “You have come full circle. As a child you built numerous treehouses. Now You’re being paid to design them!”

To see more projects about the property on which this treehouse is built, see the HGTV video on the Hefley House Historical Restoration in our Press and Media Articles section.